Do any of you follow the "HumansinNewYork" website?
A young 26 year old who loves to take pictures captures 2 or 3 New Yorkers each day in a pose and he shares their one or two sentence story.  He has captured something. Millions are following him.
Today I meant Bert who hails from the Netherlands.  Bert's quote,
"You really only begin to do El Camino when you retrace your journey"
Bert is in the process of walking back.  Yes, retracing his steps that took him 3 months and two weeks to complete.
He did not start his trek at St. Pied in southern France as some of us did.  He did not start in Pamplona Spain as others do.  No, he started from Holland.
Then, when he got to Santiago he decided to extend his trip and continue to hike to Fisterra.  The small town sits on the Atlantic Ocean, on the most far western point of land in Spain. For years people believed that it was the end of the earth.  Lands end is the literal translation of its name. Fisterra is another 60 miles beyond Santiago, the pilgrimage's destination.
Once he did that, he said to himself, maybe I should walk back. This came out of nowhere. He had never considered it before.
He walked back to Santiago, and then decided to walk back but taking a different route.  He wanted to go along the northern Spain coastline. He started to do that.  Two days into his hike back he comes to a fork in the path. One goes to the northern route, the other retraces the Frances route, the same one he just finished.
Something pulled him to retrace the same route that he had just done.
He said that the the trip back is night and day from his initial journey. The reason being that the first trip was so focused on getting to Santiago.  The challenge of doing that.  The logistics involved.
On his return he is not thinking about any of that. He says, "now is when the real El Camino begins". 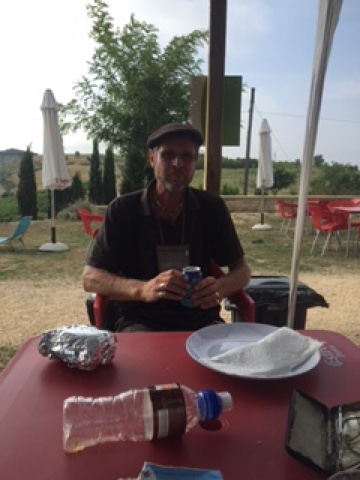